We all know that there are very many alternative stoppers to natural cork: micro-agglomerate cork, screw cap, silicone cork, glass cork to mention only a few of the most well-known ones.

I am not going to get tangled up describing the characteristics of each type of stopper, as you can find tons information about that online. Instead, I’d like to explain why we at Montefioralle have decided to continue to use the natural one-piece cork. This is a cork that is indeed made from one single piece of bark from the cork tree.

First of all, without going into too much detail, I would like to explain the main advantages of this type of cork.

An aspect that is in some ways secondary but very important: the cork is a natural product (in fact, it is obtained from a tree), ecological (it is recyclable or becomes organic waste if discarded) but above all, it actually has a positive environmental impact: corks absorb carbon dioxide preventing its release into the environment.

A cork stopper can retain approximately 309 grams of CO2, thus it actually compensates for the carbon footprint left by the glass bottle that releases approximately 300 grams of carbon dioxide during production. Isn’t that just fantastic?

Polyphenols present in the cork

Another essential aspect of natural cork stoppers is the gradual transfer of polyphenols in the cork wood which allows for the wine to evolve in the bottle and even establish its color.

Here we are, of course, talking about an extremely low amount of tannins that are being transferred in relation to the amount usually being passed to the oak barrels for aging. Therefore, it integrates well without any risk of covering the natural characteristics of the wine.​

The transfer of oxygen for the evolution of the wine

The third aspect that I want to dwell on is perhaps the one we consider the most important here at Montefioralle: the infusion of oxygen that the cork gives to the wine in a short to medium-time period.

Let us first bust the myth about the cork stopper: it does not allow air to enter from the outside. Many studies have shown that there is no permeability between the external environment and the internal of the bottle unless the shape and elasticity of the cork disintegrates.

Where do the air and oxygen that is transferred to the wine come from then? From the cork stopper itself. In fact, the stopper consists of 80% air. When it is compressed in the corking phase, a part of the stored air is released inside the bottle gradually, especially during the first year and less during the following years.

As you can see in the diagram below, other stoppers do not allow the release of oxygen or, contrarily, they allow an excessive transfer of oxygen over the years. 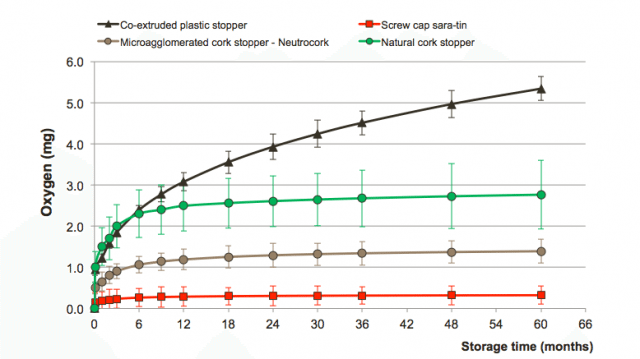 Do you remember my article about the maturation curve of the wine? The release of CO2 from the cork stopper can thus probably explain, in part, the acceleration of the wine’s evolution during the first two years.

What are the disadvantages?

Now let us analyze the other face of the coin, or the negative aspect of using natural cork stoppers.

TCA: the smell of “cork” in the wine

It has probably happened at least once that you opened a bottle of wine and noticed that the precious juice was “corked”.

That “corked” smell is caused by a fungus, l'Armillaria mellea. It is a parasite in the oak cork containing trichloroanisole (TCA) that is transferred to the stopper. Even in small amounts, this molecule (just as the similar TCB), can contaminate the olfactory of the wine in the bottle.

If a cork stopper contains a high amount of TCA, there is no other solution than to pour the wine out directly into the sink.

An ever lower risk

I will be honest with you: back in 2013, when our previous supplier delivered a batch of cork stoppers filled with TCA that resulted in making almost 5% of our Chianti Classico Riserva 2010 bottles undrinkable, we were on the verge of changing the type of stoppers to use for our wines.

Luckily, a colleague then recommended another supplier who very carefully follows the production processes. We started collaborating with him, receiving optimal results.

By now, the probability of finding a “corked” bottle is lower than 1%. In fact, on our Gran Selezione 2015 (and on all the Magnum Riserva from 2018 onwards) we use a special cork stopper on a selection and the absence of TCA is certified by a selection with gas chromatography devices.

Other than this selection process, the production industry for cork stoppers is investing in processes that continuously lower the risk of TCA contamination.

Therefore, I feel I can say that the risk will be more and more irrelevant during the coming years, as a result of the increased investment into cork stoppers of high quality. As a result, we can continue to enjoy the advantages of cork stoppers without having to suffer the defects.

In order to check the evolution of the wine and to be sure that there are no problems during the maturation period, every now and then we taste samples from all of our barrels.

At Montefioralle, the Gran Selezione was the beginning of a new challenge for our family with the possibility to find space for a new wine, a wine with a strong identity, that would be different from other wines in our selection.

How to drink and enjoy red wine during the summer

Some recommendations from Lorenzo about how to better taste red wines even in very warm weather.
Leave us your email and we will contact you as soon as the new vintage of this product is available
Notify me Close
About cookies
We use cookies on our website, the cookies we use do not store personally identifiable information nor can they harm your computer. We want our website to be informative, personal, and as user friendly as possible and cookies help us to achieve that goal
What are cookies?
A cookie is a small file and holds a certain amount of data, which our website can send to your browser. It may then be stored on your computer's hard drive and can be accessed by our web server. This cookie data can then be retrieved and can allow us to customise our web pages and services accordingly. It's important to clarify that cookies do not collect any personal data stored on your hard drive or computer.
How does this website use cookies?
• Session cookies are used in order to allow customers to carry information across pages of the website, without having to re-enter such information. These cookies delete themselves automatically when you leave a website and go to another, or when you shut down your browser.