A new type of Chianti Classico

The Chianti Classico wine named “Gran Selezione” is a recent invention. In fact, the Chianti Classico consortium introduced it only in 2013, together with other modifications to the regulation with the aim to raise the quality level of our denomination.

Gran Selezione thus represents the top tier of the quality pyramid for the wines of the Black Rooster. It is a wine that can only be produced with estate-grown grapes and that needs to comply with certain high-level chemical and physical parameters and more stringent organoleptic characteristics.

Many wineries decided to bottle batches of the 2010 vintage as “Gran Selezione”, initially destined to be labeled as “Riserva” wine, but thanks to the extraordinary vintage (2010 was one of the best vintages in recent years) they could already meet the requirements for the new typology.

In contrast, other winemakers were not as happy about the introduction of a third category that, according to them, could risk lowering the quality level of the other two categories (Annata and Riserva), and they decided to not produce any Gran Selezione wines.

The start of the “experimentation”

At Montefioralle, it was the beginning of a new challenge for our family with the possibility to find space for a new wine; a wine with a strong identity that would be different from other wines in our selection.

At the same time, we wanted to prevent a lowering of the quality of Annata and Riserva, as far as possible, which is what the protesting winemakers feared, generally.

In order to deal with this new and stimulating challenge, we decided to begin in the vineyard. We did not want to follow the decision of many others to bottle previous vintages as Gran Selezione that, in reality, had been destined for other purposes. Instead, we selected a specific vineyard plot from which to start sourcing grapes for our first Gran Selezione as of the 2013 harvest.

For our first release of Gran Selezione, we decided to work on two specific characteristics:

My father suggested using what we in the family call the “Vigna del Pollaio” vineyard, namely a plot of Sangiovese (located close to what used to be an old chicken coop) that was planted by my grandfather at the end of the 1970s.

We considerably reduced the number of grape bunches on these vines leaving not more than 3 bunches per vine.

Only a few hectoliters were produced of this Sangiovese and when the must was to be transferred to the barrel, my father insisted in blending it with 15% of Merlot from the vineyard plot that we use for our Monteficalle IGT. This in order to differentiate it even more from other Chianti Classico categories.

Of course, I did not agree at all with this idea. In my opinion, this new category should not start out as a compromise, rather that the Sangiovese needed to be the sole and indisputable protagonist of our Gran Selezione.

However, I decided that it would be the final result to convince my father. Therefore, I prepared two barrels of 225 liters, one with a blend of 85% Sangiovese and 15% Merlot and the other one with a 100% Sangiovese. Then we waited patiently during the 30 months of maturation.

At the end of the maturation period, I prepared a sample from each barrel that we blind tasted together in the family. In other words, we tasted the wines without knowing from which barrel they came. The result was that they agreed unanimously that I had been right; everyone preferred the 100% Sangiovese sample.

From a barrel of 225 liters, you get 300 bottles of 0,75 liter; therefore, that was the total production of our first Gran Selezione vintage. However, I made another error as I did not give it enough time to evolve and settle in the bottle as we launched the Gran Selezione 2013 in February 2017 together with the Riserva.

Because of its concentration, the Gran Selezione was still very rough, closed, and had very hard tannins. When it was tasted straight away along with the Riserva, it really did not show itself from its best side. Therefore, we decided that the following vintages would only be released after 20 months in the bottle to let the wine settle, find its balance, and open up better.

As we did not produce any Gran Selezione in 2014 due to the weather difficulties that year, the second possibility to experiment was in 2015 (a vintage that will be released to the market by the end of this month). We were fairly satisfied with the first result, but we realized that the Vigneto del Pollaio alone was not enough to produce the Gran Selezione wine due to the following reasons:

Therefore, we decided to integrate a younger vineyard into the production of our Gran Selezione. This is a vineyard was planted in the early 2000s on a plot that had been bought just a few years before. The plot had been lying fallow as nothing had been planted there for decades. We in the family call the plot the “Terrazze Alte” (High Terraces) that in those years started to show us very satisfying results thanks to the following: 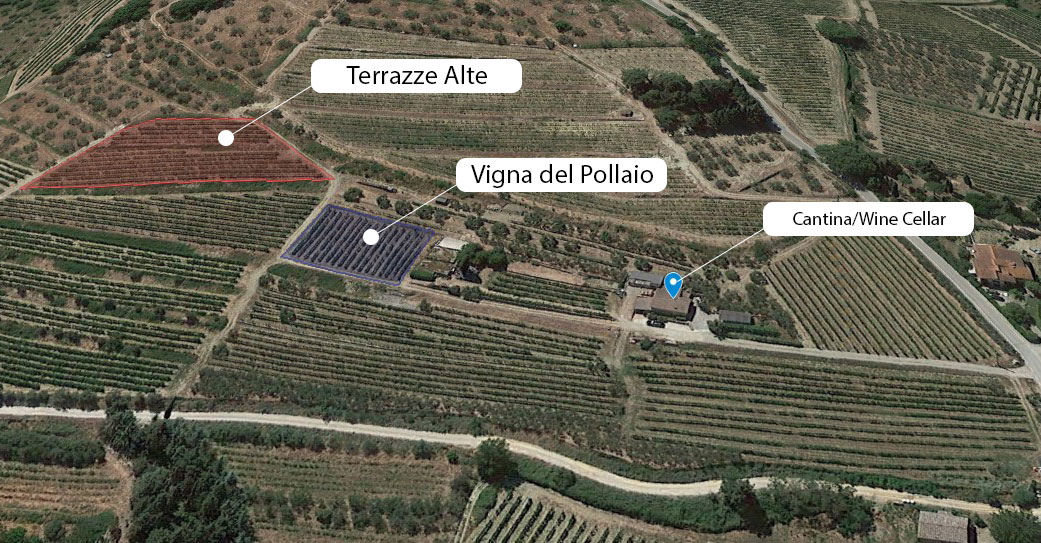 The first results were very convincing and during the following years, 2016 and 2017, we continued with our experimentation along the line of using both Vigna del Pollaio and a part of Terrazze Alte for the Gran Selezione wine.

It was with the scorching warm and dry year of 2017 that the limitation of the Vigna del Pollaio became even more obvious, as the positioning of the vines towards east-west resulted part of the grapes being sunburned and thus impossible to use.

It was in 2018 that we thus decided to stop the use of Vigna del Pollaio for the Gran Selezione entirely and instead use only the Sangiovese from the Terrazze Alte.

Could this year therefore be the end of the experimentation and the development of the “definitive recipe” for the Gran Selezione at our winery? The sample tasting that we did the other day could actually confirm this theory. The result was quite convincing even if the wine still needs to mature and settle for another year in the cellar and then lay down for 20 months in the bottle.

We will put off further thoughts about this until the coming years. I do not even want to try to express an opinion on the 2019 vintage (where the selection of grapes followed the same criteria as in 2018) as it is still a wine that is too young to evaluate.

Are you ready to taste some wine?

At this point, it only remains for me to invite all of you - clients and friends - to follow us in our experimentation phase by tasting our Chianti Classico Gran Selezione 2015 that will be released very soon.

Is it safe to ship wine in the summer?

We have used temperature control devices for our international shipping for a year. Here are the results!

Lorenzo’s tastings of barrel samples that still need to be bottled.

Lorenzo presents the Chianti Classico 2019 and the Riserva 2018: two such outstanding vintages in a row does not happen very often.

The first test of maturation in ceramic vessels for our wine

Many have asked us why we haven’t switched yet to one the many alternative stoppers available today. We are convinced that cork is still the best choice for our wines. Let us tell you why.

Red wine temperature: how to drink and enjoy it during the summer

Some recommendations from Lorenzo about how to better taste red wines even in very warm weather.

In order to check the evolution of the wine and to be sure that there are no problems during the maturation period, every now and then we taste samples from all of our barrels.
Leave us your email and we will contact you as soon as the new vintage of this product is available
Notify me Close
About cookies
We use cookies on our website, the cookies we use do not store personally identifiable information nor can they harm your computer. We want our website to be informative, personal, and as user friendly as possible and cookies help us to achieve that goal
What are cookies?
A cookie is a small file and holds a certain amount of data, which our website can send to your browser. It may then be stored on your computer's hard drive and can be accessed by our web server. This cookie data can then be retrieved and can allow us to customise our web pages and services accordingly. It's important to clarify that cookies do not collect any personal data stored on your hard drive or computer.
How does this website use cookies?
• Session cookies are used in order to allow customers to carry information across pages of the website, without having to re-enter such information. These cookies delete themselves automatically when you leave a website and go to another, or when you shut down your browser.