The main difference between Chianti and Chianti Classico

There are many articles out there that talk about the differences between Chianti and Chianti Classico (Gallo Nero) wines, so why are we writing another one on our blog?

Above all, because I realize that many of my friends that live in Florence are still not clear on what the disparity is; so, I said to myself - imagine the confusion of our clients spread out all over the world.

In addition, many other articles and discussions focus on the differences in regulations and not as much on the geographical aspect and the terroir.

Let’s start with a very important factor; Chianti Classico is NOT a sub-zone to the “Chianti” DOCG but an independent appellation that is identifiable by the Black Rooster (Gallo Nero) logo.

Chianti Classico DOCG is produced in the Chianti district, an area that is especially suited for vine growing and wine production in the heart of Tuscany, between Florence and Siena.

With few exceptions, Chianti DOCG is an inexpensive wine that is produced in the rest of Tuscany, outside the historical area. 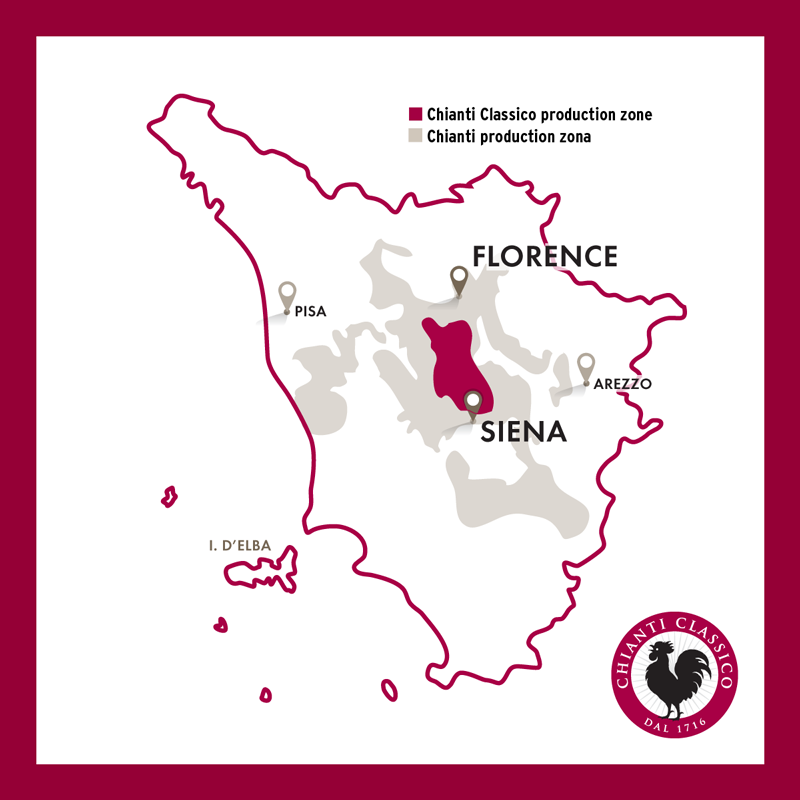 In 1716, Cosimo III, the Grand Duke of Tuscany, defined the geographical boundaries according to the territorial law most suited for grape wine production in the region. Among these areas, the Chianti territory was clearly identified. It is a region well known for centuries for quality wine production that comprises about 70000 hectares and stretches out between Florence and Siena without including the two towns and their confines.

The quality of the wine produced in this area was, however, also its damnation. In the early 20th century, in the absence of specific laws for the protection of the appellation, there were those who started to produce Chianti all over Tuscany, not just within the geographical borders of this area.

Thereafter, an attempt was made to clarify the situation by defining the wine produced within the original production area as “Chianti Classico”; however, allowing the wine produced outside the classical area to maintain the name “Chianti” only kept the confusion alive among the consumers.

Why do we want to underline the difference between Chianti and Chianti Classico?

As I often tell our clients, Sangiovese is a grape variety that is particularly sensitive and greatly reflects the character of the territory. It is highly conditioned by the soil, the climate, and the environment.

Therefore, it is easy to imagine how the result can be considerably different between a “Chianti Classico” wine produced with Sangiovese cultivated in the heart of our region and a “Chianti” wine that can be produced practically all the way to the Tuscan coast.

We could also discuss the regulatory differentiation between Chianti DOCG and Chianti Classico DOCG wines where the rules are stricter and oriented towards a qualitative production when it comes to the Black Rooster wines (lower yield per hectare, a longer minimum period of aging, etc.). That would be a further way to highlight the real and substantial difference between the two appellations: the territory where the grapes are produced.

Wouldn’t it be possible to clarify it once and for all?

The easiest solution would be for the wineries belonging to the Chianti DOCG consortium to voluntarily abandon the name, perhaps seeking new classifications that would, consequently, offer consumers better clarity (new appellations could be created such as Firenze DOC, Siena DOC, Arezzo DOC, etc.). In that way, they could embark on a new journey of valorization of the territory without following in the wake of an appellation so very different as is the case with the Chianti Classico.

Who knows if this type of agreement cannot be entered into in the future?

Daughter of Fernando, “The Mistress” as she is jokingly referred to by the rest of us in the family, Alessia is to all effects the owner of the winery. Together with Manila, she takes care of the visits to and the wine tastings at the winery.

On the occasion of the 50th harvest at Montefioralle, we retraced the historical memories of these years with the Sieni family and their friends via a video reportage.

Alessia’s famous recipe of her `cantuccini` with raisins, cookies that pair excellently with our Vin Santo.
Leave us your email and we will contact you as soon as the new vintage of this product is available
Notify me Close
About cookies
We use cookies on our website, the cookies we use do not store personally identifiable information nor can they harm your computer. We want our website to be informative, personal, and as user friendly as possible and cookies help us to achieve that goal
What are cookies?
A cookie is a small file and holds a certain amount of data, which our website can send to your browser. It may then be stored on your computer's hard drive and can be accessed by our web server. This cookie data can then be retrieved and can allow us to customise our web pages and services accordingly. It's important to clarify that cookies do not collect any personal data stored on your hard drive or computer.
How does this website use cookies?
• Session cookies are used in order to allow customers to carry information across pages of the website, without having to re-enter such information. These cookies delete themselves automatically when you leave a website and go to another, or when you shut down your browser.