The “Holy” wine of the old Tuscan hospitality

It is a sweet wine that is typical for our region. It is traditionally paired with cookies, and aged blue cheese, or it can be enjoyed on its own on a cold winter night.

Vin Santo is a sweet wine that undergoes a complex process that has its roots in the century long experience of the Tuscan winemakers. In fact, it is a traditional product that is common in all of Tuscany, with only smaller production differences.

For our Vin Santo of Chianti Classico, we only use white grapes (Malvasia and Trebbiano) and once they are picked, they are handled in a particular manner.

As soon as they are picked, the grape bunches are hung to dry on wood canes in ventilated rooms for a couple of months. This procedure helps the water in the grapes to evaporate and increases the percentage of fructose that remains inside the grape.

After the drying period, the grapes are pressed and then transferred to small wood barrels called 'caratelli' for fermentation where the must is filled up to a maximum of ¾ in the barrel.

The caratello is closed hermetically so that a high pressure is created during the fermentation. This, together with the fact that there is a daily range in the place where the caratelli are stored, makes the fermentation process slow and unique.

After three years, the result is a sweet natural wine, as a part of the sugar has not developed; a wine that can be paired with desserts or blue cheese. 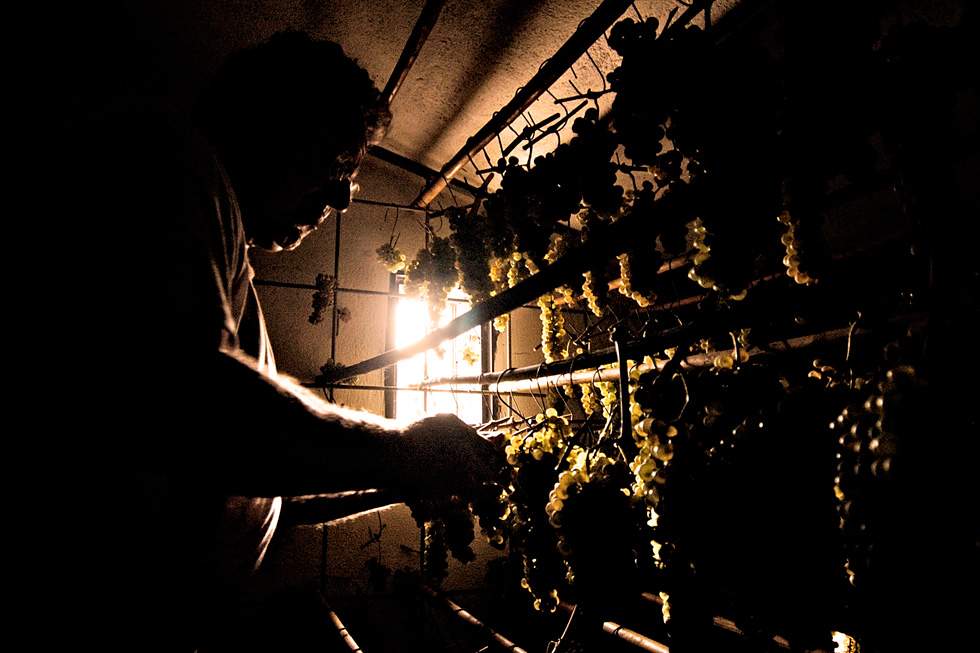 The origin of the name “Vin Santo”

In the winter of 1439, a council was held in Florence to try to unify the Catholic Church and the Orthodox Church. During the council, they also held several banquets. One was organized at the end of the proceedings as a sign that an understanding had been reached.

At the end of the symposium, a delicious local wine that had been made with dried white grapes was served. A wine that in that period was called “vin pretto”.

However, when the big and imposing Basilius Bessarion, a Roman Catholic cardinal and Latin Patriarch of Constantinople, brought the wine to his lips he exclaimed: “It is wine of Xantos!”, alluding to the well-known Greek island.

The participants, however, admitted that they had found such virtues in the wine to declare it “Holy” (Santo). The wine, Vin Santo, thus remained and will surely remain for who knows how many centuries yet to come.

Below you can consult the detail and the technical data sheets of this typology of wine as regards the following vintages:

Leave us your email and we will contact you as soon as the new vintage of this product is available
Notify me Close
About cookies
We use cookies on our website, the cookies we use do not store personally identifiable information nor can they harm your computer. We want our website to be informative, personal, and as user friendly as possible and cookies help us to achieve that goal
What are cookies?
A cookie is a small file and holds a certain amount of data, which our website can send to your browser. It may then be stored on your computer's hard drive and can be accessed by our web server. This cookie data can then be retrieved and can allow us to customise our web pages and services accordingly. It's important to clarify that cookies do not collect any personal data stored on your hard drive or computer.
How does this website use cookies?
• Session cookies are used in order to allow customers to carry information across pages of the website, without having to re-enter such information. These cookies delete themselves automatically when you leave a website and go to another, or when you shut down your browser.